The band HaChucpa was founded in 1997 within the HaDivadlo Theatre. It was influenced and inspired by performances presented by W. Spitzbardt in this theatre (M. Buber: Cesta člověka, P. Celan: Slabika Bol). The band is formed by HaDivadlo members, students of The Janacek Academy and Brno´s conservatory, members of the Brno´s Jewish community and others. "Chucpa" means "Cheek" and its of course a fairly cheeky, that we dared to pick up the almost discontinued tradition of jewish culture in Brno. To revitalize it and present to the public jewish music, jidish and hebrew songs, klezmer accompanied by readings of jewish literature....

Our present repertoire also includes parts of classical music composed by jewish authors (Ernst Bloch, Pavel Haas...) Our klezmer originates from the tradition of ashkenazi Jews but its not closed to influence of  moravian folk musik and vice versa its not tributory to present fashion of playing klezmer outside of its context. Because of this the jazz accent is not very present. The magic of klezmer is in the mix of melancholy and joy - how the Talmud teaches: If we are too sad, we should remind ourselves of the command to be joyfull. If we are to merry, we should remind of the destroyed Temple and be sorry. 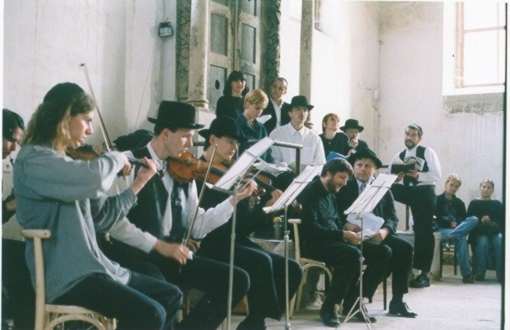